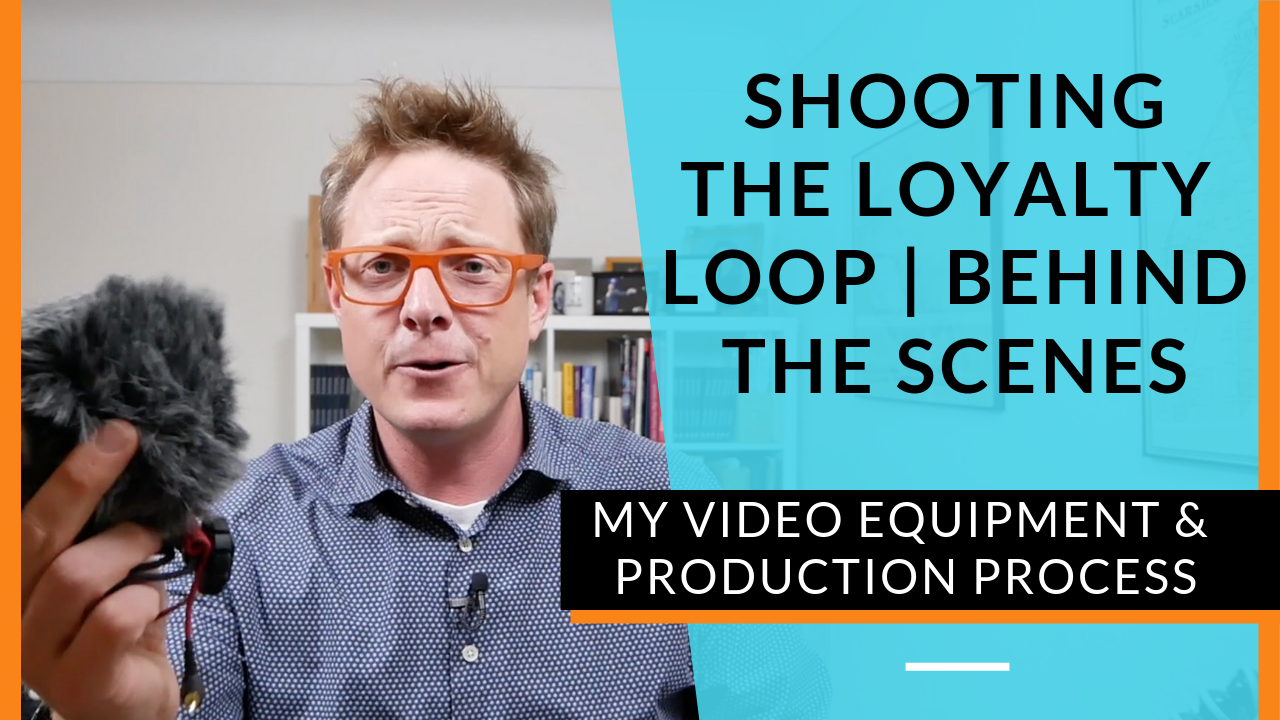 I’ve had a lot of people asking me recently what gear I use to shoot the Loyalty Loop videos.

I wanted to give you a special behind the scenes look at not just the equipment I’m using, but the process I follow for shooting the videos.

I want to demonstrate that it's not just about the equipment. I think it's just as much about the pre-production and the process.

But first, let me answer the burning question…

What gear do I use to shoot The Loyalty Loop?

The video above is shot on my GoPro HERO7. I really like this camera, not least because it's a great travel size. I tend to use it a lot for time lapse and B-roll – the audio is great too.

I attach this camera to a JOBY, which is a little tripod. I like these so much I also have a big JOBY which I’ll talk to you about in a minute.

The other camera I use – especially when I’m travelling – is the Panasonic LUMIX G85 MK.

On top of that, I have a really nice RodeLink Wireless microphone system. I use a belt pack with that mic – I used to use a wired mic plugged into the G85, but I kept walking away and pulling the camera with me!

The Panasonic LUMIX sits on an MeFOTO Tripod. It’s a really good tripod albeit a little heavy, but I use it in the studio all the time. I travel with it occasionally because having a tripod is better than not having a tripod or using a JOBY.

Now very often, when I'm on the road, I'll usea little Rode microphone that fits on top, in the shoe of the LUMIX G85 and this gives me really good audio.

When I'm shooting at an event, this is the mic I use. It's a really good directional mic, and it allows me to pick up all the right audio. It also has a little squirrel on top, which keeps the wind noise down.

I use the LED lights that you can see in the video which give me the ability to shoot nice soft light on my face. I also have some Softboxes on top.

Bear in mind, I don't have these lights when I'm on the road.

All of my different cameras and mics, etc have different chargers and batteries, so I travel with a travel backpack.

Watch the video above for the full view inside of my travel bag with all my gear in it.

Generally, I’ll have my camera/s, the JOBY Tripod, a charger, charger for different charging elements, my boom mic, my Rode Wireless mic system and an extra battery for charging things. Also in the bag is normally a hard drive to handle all the video,

Once I’ve shot my video I take it all off the cameras and put it on SD cards or SD micro cards, and I put them on my laptop so that I can edit them.

I use Final Cut Pro, and have done for a long time. It's a great tool, and I use some really nice templates and plugins from LenoFX to help me with the effects.

I tend to use music from Epidemic Sound which really helps the production come together.

The pre-production process is arguably more important than the shooting of the videos  itself.

I've started to get more efficient with this, and it's because of the process.

So here’s my process…

If I want to tell a story or I'm thinking about a particular problem my audience has, I actually

spend about an hour to two hours a week doing research for future episodes of The Loyalty Loop.

I script every week's episode but I don't always write a script on the computer.

I usually write them on note cards – lots and lots of note cards, over and over again. The reason being, I've found it helps when I write like I speak.

It also allows me to reshuffle elements as I realize things need to be inserted or decide I need to put things in a new order. It’s also a very portable solution! If I'm in a location, I can walk around with these note cards and very easily figure out what I need to shoot.

If you’re not familiar with the term B-roll, it’s essentially the second track roll. For example, in my videos, A-roll is me talking and B-roll might be an awesome shot flying by or a still picture of a character I’m introducing.

It’s really important to include B-roll in videos because video is a ‘show me’ medium. You should aim to show your audience instead of telling them whenever you can.

So, when I'm writing the script and going through the story, I'll make little notes about what kind of B-roll I need, so I know what I need to gather when it comes to production.

Sometimes, I have to shoot the B-roll, so I have to think ahead for future videos and make sure I get what I need when I’m on location.

Step 4 - Run through the script

I do this a few times out loud, and usually, I try to time it to see if I can get a good sense for how long it is.

I also know that when I don't script it well, I just go on and on, I have no direction and the video ends up being 10 minutes long. While my YouTube analytics show me people do stick around, I know that I could be more efficient with my words and my pictures, and it shouldn't have to be this long.

When I hear myself reading from the script out loud, I often realize that I'm saying something twice or that I don't need a particular sentence.

So I'll either cross sentences out or even write a new card.

And this step is where all the video equipment I’ve talked you through here comes into its own – and where the production ends.

The key to being successful in creating videos is to think like a video editor.

Instead of thinking like a director or a writer, think about the edit. How will these elements be put together in post-production?

I used Final Cut Pro to edit my first year's worth of videos myself and tried to get the feel for what’s needed and what goes into the process. I’m a better producer for it, and now, I have someone named Christina who helps me do my editing every single week