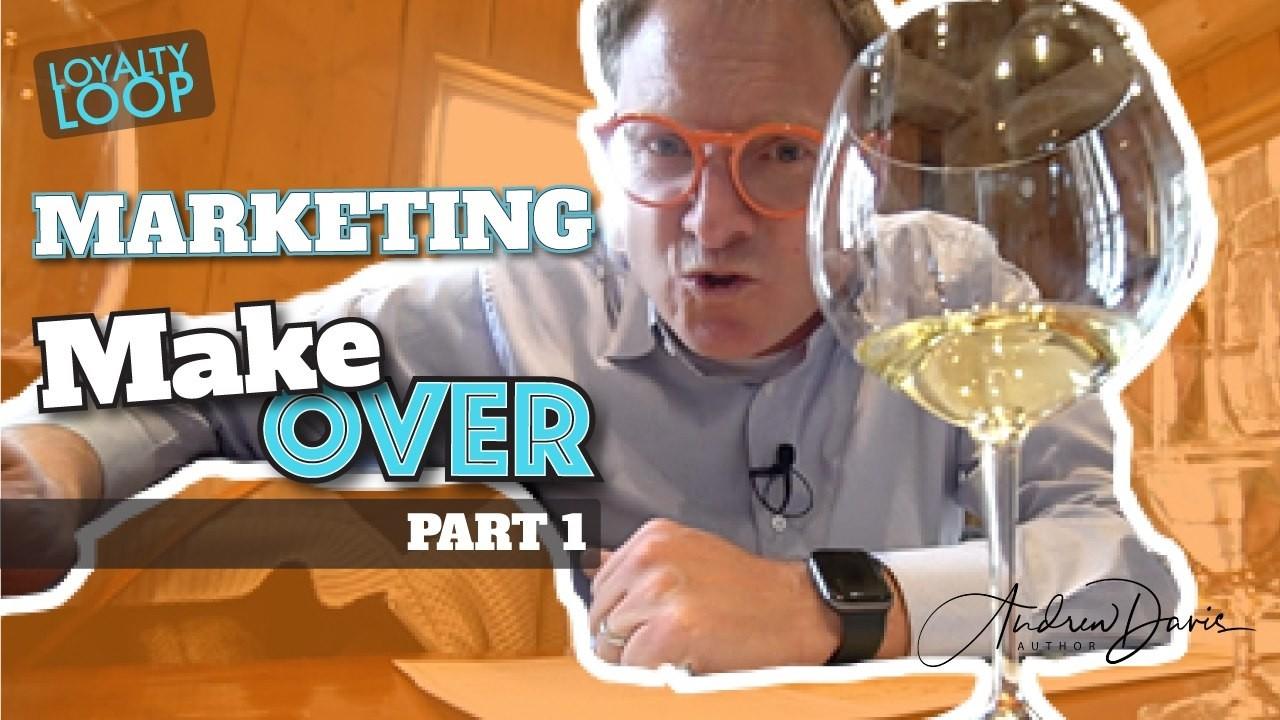 You know what’s going to happen as soon as you sign up for a free software trial, demo, or webinar, right? You’re going to get hit with at least a hundred emails and a dozen phone calls from eager marketers, all desperate to talk you into a sale.

And I know, because in the last two years I’ve signed up to 140 of them!

But how many of these calls and emails actually work? Well, not that many because there are usually at least 4 glaring issues with each and every one of the marketing tactics they’re using.

Over the next 3 posts, I’m going to help a couple of real-life sales people uncover these issues and give their marketing campaigns a bit of a makeover so they can deliver bigger, better results.

And because I’m writing this from Napa, California, I’m going to start with a wine analogy...

It's winter here in Napa Valley. And every one of the vines here are dormant, they’re sound asleep. But, don’t let the peace and quiet fool you — there’s a whole lot of invisible activity going on.

These vines are actually hard at work, getting ready for the next big harvest.

I want you to imagine that this vine is your website. While there might not be much obvious activity on the outside, every single day it’s hard at work generating leads that you’ll harvest as sales at some point in the future.

Because, when it comes to growth — whether we’re talking wine or websites — it’s often the less obvious stuff, that can make the biggest impact.

Mystery shopping: getting inside the customer’s mind

In the first episode of this 3-part series, we need to get inside the mind of the customer and to do that we’re going to do a little mystery shopping with the two brave companies who have decided they’re cool with letting a hyper-critical marketing guy like me criticize their marketing campaigns: Aprimo and Vidyard.

First up: Aprimo, one of the world’s most ubiquitous digital asset management providers

Okay, game on; let's imagine that we are looking for a digital asset management tool, and we've heard about Aprimo from some of our colleagues. We go online to check them out and watch one of their videos. Now, it’s not amazing, but it’s decent enough to prompt us to take part in their cool quiz that assesses our content lifecycle gap, and it turns out we’re a level 3.

Level 5 is where we really want to be so we hit the “Find Out More” button and it seems that they want more of the same info we just filled out. So we head to the “Discover More About the Product” link, and yup, more forms here. So we decide to request a demo instead, and, oh man, it’s the same form again! Finally, we take a tour and watch an intro video, and, wouldn’t you know it, they want the same info all over again.

Next up, we get a nice email from Annette at Aprimo, and she’s desperate to make an appointment with us in her calendar. As a persuader, she’s sent over a little video, which isn’t bad, but could be better. The following day, she sends me a webinar invite for Thursday September 26, but when I click the link the page says September 8. Confused, I try to click the banner at the bottom of her email to download the report, but it’s not linked.

Undeterred (hey, it’s all research, right?), I sign up for the webinar and — great! — I immediately receive a confirmation. But two days later, I get another marketing email which confuses me some more. I mean, I’ve already subscribed to the webinar — haven’t I?

Okay, we’re going to move onto our second company in just a second, but before we do, I have a question for you. You’re a savvy marketer, so where would you start if you were giving Aprimo’s marketing campaign a makeover?

What’s the very first thing you would change about the experience?

And remember, don’t focus on the vine, on the bits that people see, focus on the roots instead. Go ahead and leave your suggestion in the comments below…

Full disclosure: I’m a big Vidyard fan! It’s a video platform designed to help you integrate video into your sales and marketing efforts, and I gotta admit, it’s awesome — I use it every day.

So we’re mystery shoppers again and this time we’re going to imagine we want to use video in more of our marketing and sales processes. We check out Vidyard’s website and see they’re offering to create a personalized video, so we give it a try.

We enter our first name, and boom, a video shows up. We start watching it, and we're waiting for our name…but then, crap, they ask for our email address. Okay, they can have the super secret spam email address that we never check. Then our name appears on the video and that’s pretty cool. So we’re impressed, but not enough to engage with chatbots or book a meeting with Jesse, which is what Vidyard are asking us to do now.

For one thing, we still need to know how much this thing costs so we check out the different tiers for different needs. Then we start watching the demo video, but we don’t get all the way through because, let’s say, the phone rings, or someone comes to the door and distracts us. We’re going for realism here, folks, and this is how people really buy — it’s rarely a smooth, uninterrupted process from start to finish.

Now, when we get back to our email after that distraction, there’s a very nice note waiting for us from Courtney at Vidyard. She wants a meeting on Thursday, but weirdly there’s no personalized video from her, even though Vidyard are all about video.

We can’t do Thursday and before we try to negotiate a different day, we want to know what she usually covers in that phone call she’s so desperate to set up. We hear nothing for 4 whole days, then she hits us with an email with a thumbnail to a video about how video can work for sales. Only, it’s not particularly compelling. Later the same day Courtney sends me another nice little note about the call and a few days later I tell her I’ll try the free tool, but it turns out she’s out of office.

The 4 issues: how many did you spot?

Okay, so we’ll take a timeout right there. Both companies have the same 4 marketing problems as every other SaaS company out there. And remember, I’ve signed up to 140 of these things, so I know that Vidyard and Aprimo are far from the only ones making these errors.

Every one of these sales people wants to set up a call and get some time in your calendar. Every single one! Where’s the excitement?

All the way through the process, it feels like it’s all about them, when really it should be about you, the customer.

The whole thing feels horribly rushed. They’re desperate to get you on their calendar, to agree to a call, to schedule an appointment RIGHT NOW. Even though you’re nowhere near ready and haven’t once actually asked for a call.

Terribly disjointed, in fact. They’re all over the place; there’s no flow to the experience. Like with the Aprimo webinar and the confusion about whether or not I’d already signed up.

The thing about each of these issues is that instead of earning the audience’s trust, marketers are just demanding it. Instead of earning attention, they’re just grasping for it, whenever, and wherever they can. And that’s why it’s not working for them.

Okay, now it’s over to you again. I’d love to know where you would start Aprimo’s and Vidyard’s marketing makeovers. What would you prune? Where would you encourage growth? How would you fortify the trunk to build a better experience?

Leave your comments below, but please be kind. These teams were brave enough to open themselves up to criticism and to ask for ideas, so they deserve our professionalism, right?

Don’t forget to join us next week for part 2, where we’ll pick an aspect of each campaign to make over. Sign up here to subscribe and you’ll get the next episode a whole day before everyone else. And in the meantime, check out your own vineyard; go undercover on your own website and act like a customer — take a little time to see what they experience as they go through your buying journey.

Now, I’m thirsty after all of these vine analogies, who’s for a glass of wine?