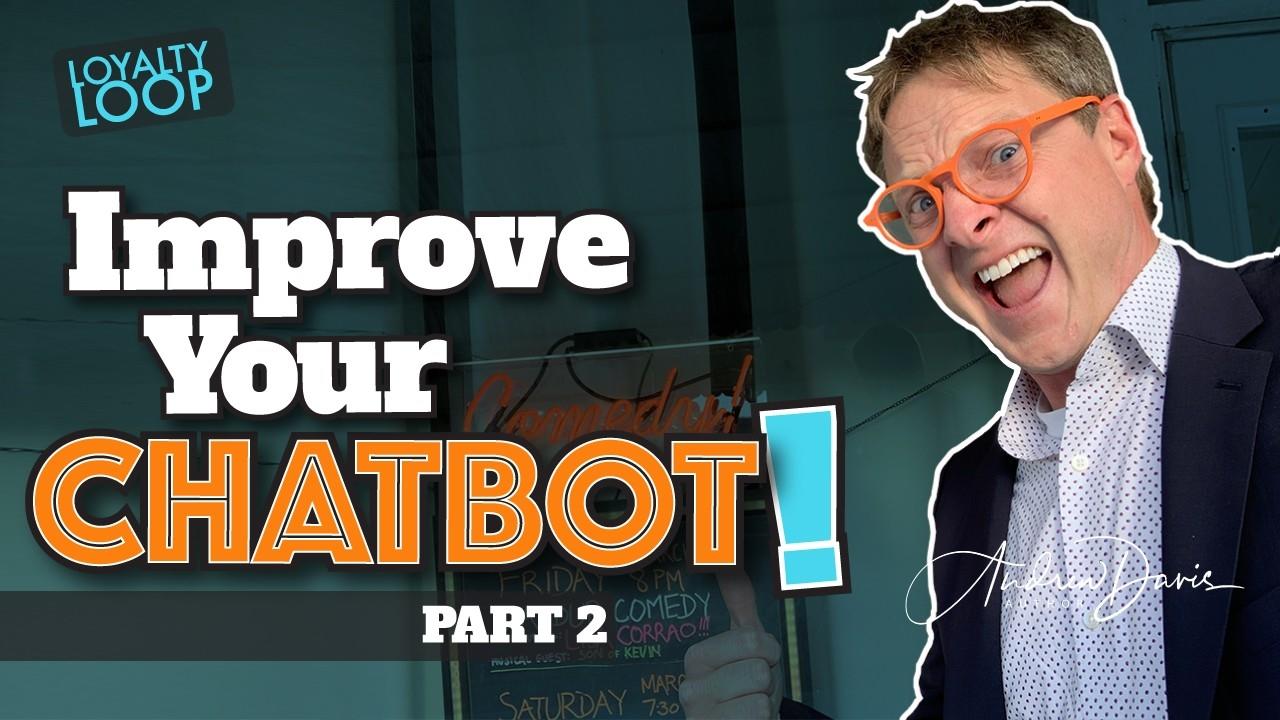 Chatbots are billed as one of THE hottest developments in marketing right now. Yup, by the end of the year we’ll all be using them, our sales will be off the charts, and we’ll save a whole bunch of cash on our customer support services.

And why do chatbots supposedly work so well? Because they’re so gosh darn realistic, that’s why. You’ll feel like you’re communicating with an actual real life person, one who gets your needs and can hook you up with exactly what you need.

But do they really live up to the hype? Well, if you caught last week’s episode you’ll have seen that some of them have a long way still to go.

Will the examples in part 2 do any better? Let’s find out!

I’m still here in the Doghouse Theater in Del Ray Beach, Florida with Free Tacos. You’ll remember from last week that the Doghouse Theater is usually packed with paying customers who want to see an improv comedy show — so no scripts. But luckily for me, comedy improv duo Free Tacos (or you can call them Rebecca and Catherine) have agreed to take to the stage with a script, just this once.

But I haven’t given them just any script…no, they’re going to perform a couple of actual chatbot conversations I’ve had. (For the full performance experience, check out the video!)

First up, a marketing agency that actually wants to sell me the services of creating a chatbot:

Chatbot: Hi, how can we help you? Continue as Andrew?

Yikes! Okay, not much to work with there. But don’t worry, there’s another script to look at, a conversation with Drift, another chatbot agency:

Chatbot: Oh we have a few different plans that you can check out on our pricing page if you're interested. Bots like me start on our Pro plan and above. All of our plans can be billed monthly so you don't even have to commit to any annual contract. But, we don't give any free trials anyway. Wanna see what I can do? That'd be great! Or not right now. I'll just do a demo.

Chatbot: Ow, no worries. Would you be interested in seeing what a bot like me would look like on your site without even installing any codes? Yes please! Or no thanks.

Tate (an actual person): Ow, hey Tate here. I'm sorry for the slip up on your company name.

Drew: Yeah, what happened there?

Chatbot: Well, we pull that out using reverse IP lookup and you must be near the port authority offices.

Drew: I'm not sure about that, that's in Pennsylvania and I'm in Florida.

So, what do you think?

Time to rate the bots...

If we’re working on the assumption that the whole point of a chatbot is that it makes you feel like you’re communicating with another human, how would you rate these two conversations on our scale of 1-10, with one being the robotyist robot you’ve ever encountered and 10 being so human you almost asked it out on a date?

For me, the first one is a no-brainer. It’s a straight up zero. Yes, it was so bad it doesn’t even make the scale. It didn’t just come across as a robot, it came across as a robot that’s been left out in the rain too long and rusted over! That ain’t great for any business but for one that’s an actual bot marketing agency, a bot that doesn’t even respond really isn’t going to cut it.

But what about the Drift bot?

Now, full disclosure, about 90 seconds after I thought Tate and the Drift bot had totally disappeared, Tate showed back up and we had a really nice conversation. But we’re not here to judge the human element of the business — it’s chatbot theater, not Tate-bot theater. So, based purely on the chatbot element of the conversation, I initially gave the Drift bot a six. Why? Because it had some personality!

Only then I thought about it some more and I downgraded it to a four because there were just too many things it got wrong. So if Tate and his colleagues want to up their score and create a better chatbot experience, what should they do?

I have three ideas for them straight off the bat.

1. They have to listen

If you’re going to create any kind of chatbot, it has to be ready to listen. You can’t just spout out your pricing policy when someone asks a question that has nothing to do with pricing! The chat has to be relevant to what the customer wants to know.

2. You have to be prepared

Following on from that, if you’re going to give me the ability to type a message instead of just choosing from a set number of options, you have to be prepared for anything. Which means that it’s actually better to have your bot say, “I’m sorry, I’m not sure what you mean” rather than just delivering random content.

This might just be the most important thing to consider when creating a chatbot: don’t try to be too smart. Inserting the wrong company name at the beginning of the chat just gives the impression that the chatbot knows nothing about me and makes the whole company look a bit silly.

Now, Tate did interject to save that portion of the conversation but the potential damage had already been done — not trying to be too clever in the first place, keeping it simple from the start, would have been far more effective.

In fact, if you take nothing else away from this episode, remember this golden chatbot rule: keep it simple and have some fun!

Wondering if your own chatbot measures up? Go and have a chat with it right now and try to figure out where it lands on the 1-10, robot to human scale. Oh, and don’t forget to rate today’s scripts in the comments!

Don’t miss next week’s episode of The Loyalty Loop. Subscribe here to catch it a whole day before the rest of the world.