Most talked about marketing campaigns | Brilliant or stupid? 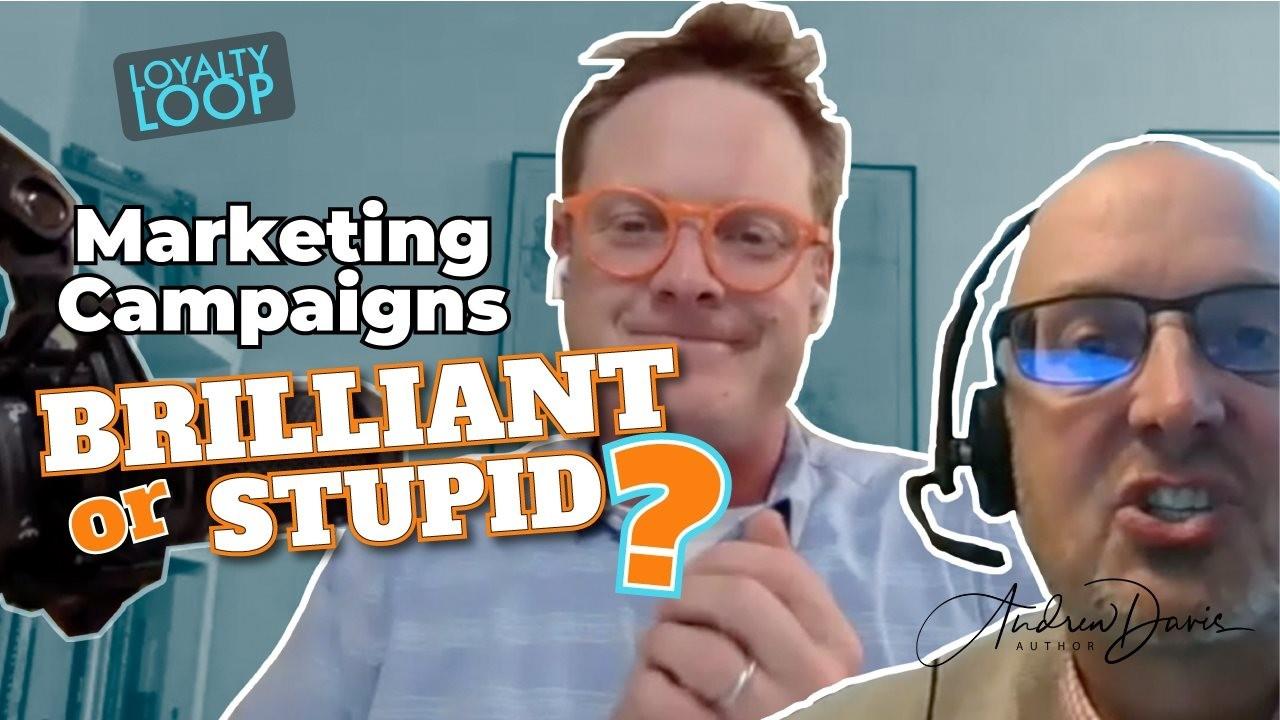 Ever watch an ad and find yourself thinking, “huh?”, even though you know all of your buddies love it? Or absolutely cracking up at a “genius” marketing campaign only to find the rest of the world up in arms about it?

All the damn time, right?

Because that’s the thing about great marketing: it can divide us, make us think, cause debates, and apparently inspire awesome new YouTube shows such as the one linked right here.

So here’s how it works. Dean Shaw and I, Andrew Davis, are going to take a whole bunch of our favorite/most hated ads and marketing campaigns and try to decide whether they’re brilliant…or stupid. Then we want you awesome folks to chime in and let us know whether or not you agree, and why.

You’ve heard of Peloton, right? You must have because, man, that ad was all over the place all through the holidays. And Peloton got a ton of heat for it because a whole bunch of viewers (and by that we mean the Twitterverse) reckoned that a husband surprising his wife with a $2500 Peloton bike is sexist. The blow-back was huge and generated some amazing spinoffs.

So here’s the question: was that ad brilliant or stupid?

Dean’s gonna sit on the fence with this one:

“Andrew, that was a brilliant ad. People are way overplaying this. It’s unfair indignation on the part of the mob media on Twitter. Let me tell you, add up every gift I’ve ever bought my wife and that bike is still way more exciting. Yup, even better than that casserole dish I gave her for Christmas one year.”

And do you know what? I agree. I reckon that if we’re labeling this one as sexist, we have to add the December to Remember ad from Lexus to the sexist pile, along with every Kiss Begins With Kay Jewelry campaign.

Bottom line: that holiday ad generated a huge amount of press for Peloton and I’m sure it helped them rack up some pretty healthy sales figures over the last couple of months. It’s definitely making it into the “brilliant” pile.

Ad no.2: South Dakota’s on meth

This ad put The Mount Rushmore State on the marketing map, for sure! Everyone from the New York Times to NPR couldn’t help but weigh in on their anti-meth campaign after they launched possibly the most controversial tagline ever:

Well, for my money, it pretty much always comes down to this — what were they trying to achieve with the campaign, and did they nail it? And in this case, I reckon they did.

It certainly seems like the main marketing goal here was to actually make people aware of South Dakota’s meth problem and, boy, did they accomplish that! Months later and we’re still talking about it, right? Even if only in the context of the ad itself.

Okay, so they might have had a teensy, tiny tagline brainstorming issue, but that aside, I’m calling “brilliant” on this one.

Dean agrees: “Sure, the tagline was easy to pick on on social media but if you put that aside and get down to the actual content of the commercials, it really does drive the problem home. That the issue affects everyone — our friends and neighbors — not just random strangers or ne’er-do-wells, you know?”

This is citizen-meth-addict view is a campaign strategy that plenty of other people have tried, in plenty of other places, but this is the only one that has actually managed to raise real awareness.

And it’s all thanks to that crazy tagline!

Next up: Pizza insurance

Yup, apparently that’s a thing…who knew? And it’s down to Domino’s who offer “carry-out insurance” where they’ll replace your order for free if anything happens to it on the way home.

How it works is you just click a little box at the end of your order form to add the insurance. And it doesn’t even cost you anything. But here’s the thing — I was browsing Reddit a few days ago and someone on there actually asked if anyone had ever used Domino’s pizza insurance. Want to guess how many had?

Zero. Zilch. Not a single person.

And Dean reckons he knows why: “It might be the dumbest idea in the history of dumb ideas. It’s a pizza, not the Mars Rover. And hey, if you think about it, they’ve had insurance since they started — you get the wrong order, you just call them up and they bring you the right one. This is a gimmick they didn’t need.”

Even worse? No one likes insurance. It’s a necessary evil, right? It’s not a selling point. Every marketer ever will tell you that they hate marketing insurance. So it’s great that they’re so committed to getting you the right pizza — that part is brilliant — but they really should’ve come up with a better way of executing it.

As Dean says, they’re complicating the most simple product on the planet!

Our verdict: we like pizza, we don’t like insurance. This one is definitely in the stupid column.

For the few of you that haven’t seen this one, it’s Elon Musk getting all braggy about his Cybertruck’s unbreakable windows…right before he smashes them during the demonstration. Oops.

So this one’s a no-brainer, right? It’s clearly stupid.

Well, I’m not so sure. I fit squarely into the “it’s a giant marketing conspiracy” camp; I actually think it was a stroke of genius. A PR stunt at its finest — and hey, it got Elon Musk and his Cybertruck on just about every news media outlet possible.

“Frankly, Elon Musk could sell a bag of rocks, he’s going to get plenty of publicity whatever he does. And when one of the prime features of your product is that the windows don’t break, the one thing you don’t want to do is highlight the fact that the prime feature doesn’t work!”

So we actually are on the fence about this one. One vote for brilliant, one for stupid.

And finally, one last brilliant or stupid: this show!

And if it helps you in your decision making, we’re thinking of taking a bite out of the KFC What-the-Cluck campaign next time…